During the fighting 1943 at the river Pronja, he stood in for the commander of infantry regiment 460. The regiment had to defend its position against superior soviet forces. They even held their lines after soviet troops broke through left of them. Following this breakthrough, the regiment’s command post was assaulted by a battalion from the rear on the afternoon of November 16th 1943.

About 20 soldiers started to defend it, but were not able to hold for long. Major Strohm ordered to break out to an artillery firing position, about 300 meters away. Once they reached the guns, they were turned around and used with direct fire against the attacking Russians. Reinforced by an engineer platoon and 5 assault guns, he led a counter attack and retook the command post. For this success, in combination of other heroic action, he received the Knights Cross on January 18th 1944. 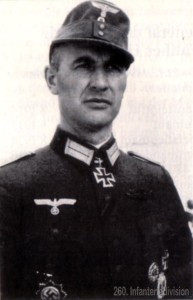 As Lieutenant Colonel and commander of infantry regiment 470 he and his men broke through the soviet encirclement. His regiment cleared the escape path for the rest of the 260th infantry division.

As a result of lack of ammunition and pressure from enemy forces it was ordered to destroy all heavy weapons and vehicles. The division dissolved and soldiers tried to avoid capture – single or in small groups. After an odyssey of three month straying around, he managed to reach German lines. On September 24th 1944 he was found with 10 wounds – including a shot in the belly that was not treated in a haystack about 400 meters away from the main front line. 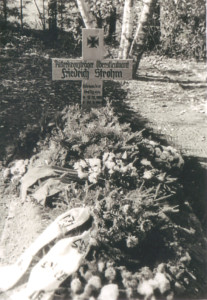 The grave of Colonel Strohm

He was recovered by a reconnaissance patrol and brought to a military hospital. There he died the same day. He was buried with full military honors on the cemetery at Borschimmern. Posthumously, he received the 613th oak leaves on October 18th. Also posthumously, he was promoted to Colonel on November 15th 1944.