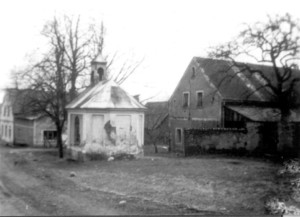 The house where my grandfather was born in Hüttenhäuser 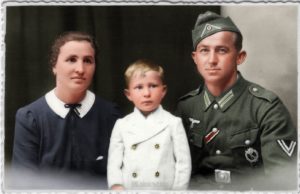 Michael Korn with his wife Resi and son Eduard

My Grandfather was born on October 06th 1908 in a little town called Goldwag-Hüttenhäuser (today Boudy), near Tschernoschin (today Černošín), County Tachau (today Tachov) in the Sudetenland. He made a living being forest warden and county hunter.

On June 16th 1934 he married his wife Theresia Korn (her maiden name was Baierl) in the city church of Tschernoschin. She hailed form a neighboring village called Triebl (today Třebel)

On 27th August 1939, he was drafted in the Wehrmacht. He entered service at the 79th Company, Landesschützenbataillon 20 in the Defense Sector XIII (Companies 77.-80. were positioned in Tachau, of one was compiled in Mies (today Stříbro)).

After basic training, he was transferred to the 260th Infantry Division. As of 14th December 1939 he served with the 2nd Company, Infantry Replacement Battalion 480 in Nürnberg. 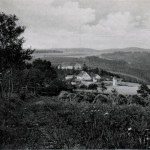 He served in various units of the Infantry Regiment 480:

On October 10th 1941 – the Division was on the assault for the town of Kaluga – he received the Iron Cross IInd Class from the Division Commander, Lieutenant General Schmidt. 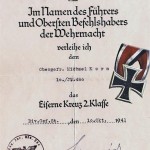 The Award Certificate for the Iron Cross 2nd Class

During the battles around Juchnow, he was wounded for the first time. On 13th of February 1942 he received the Wounded Badge in black from the battalion commander, Major Gaudig.

During the fighting in the Ressa-Ugra emplacement, he participated in various combat engagements. Therefor he received the Infantry Combat Badge from the Regiment Commander, Major Dr. Friker.

On this day in August he was promoted to Private First Class, on the following day, he was recommended as hunter for the Division Commander, Lieutenant General Hahm –  by Colonel Fremerey. 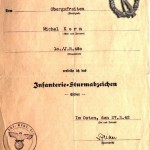 He remained there – later as Corporal – until the end of the division in June 1944, even though the General had offered to keep him as his hunter. My Grandfather – stated in a letter of the General to my Grandmother dated 02nd November 1944 – preferred to stay close to his comrades he had known for such a long time. 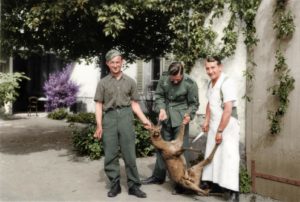 A deer, shot on June 28th 1941 near Bourbon-Lancy (Thanks to Benoit Vienne for colorization)

After the Soviets large scale attack on 22nd of June 1944, he was called „Missing in Action“ first. The medical sergeant Alfred Geck from Nuremberg wrote a letter on 22nd January 1949 that he was caught as prisoner of war on 07th July 1944 and that he had met Michael Korn in a POW camp near Minsk. My grandfather had received a gunshot wound in the bottom during his capture and was treated later by Sergeant Geck.

Mid-August, my grandfather came down with dysentery and died. According to Mr. Geck, he was buried in a single grave on the northern edge of the camp. His grave was provided with a simple cross. The Name or number of the POW camp is unknown.

The camp was dissolved by the end of September 1944. Until then, 211 Prisoners had died. Since I have no further Information about the camp, the grave could not be located yet. 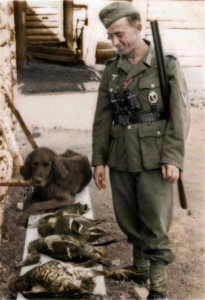 His identification tag had the number -32- 79.Ld.Schtz.Btl XX/XIII. I don’t have it in possession. If anyone has further information, please contact me. 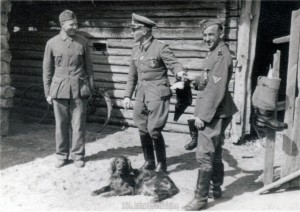 With Lieutenant General Hahm and a Russian volunteer

On May 10th 1945, his home town and the vicinity was liberated by Russian troops. His wife Theresia Korn and his son Eduard (my father) were forced by Czech military and police to leave their home with 50 Kilogram of luggage for the whole family.