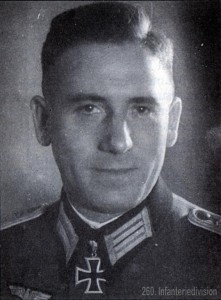 Otto Vincon was not only one of the highest decorated soldiers of the 260th Infantry Division but the whole German Wehrmacht.

Born on January 23rd, 1906 in Perouse near Pforzheim, he entered Infantry Regiment 13 in 1924 as an NCO candidate. After twelve years service, he was discharged 1936 as a technical sergeant.

With beginning of the war in 1939 he joined 6th Company, Infantry Regiment 470, 260th Infantry Division as a second lieutenant (reserve). This unit was called up and participated (as a first lieutenant of the reserve) in the western campaign.

Otto Vincon received on August 03rd, 1942 the German cross in gold and carried out  in autumn 1943 as captain (reserve) and leader 1st company, Infantry Regiment 460 the retreat fights into the area of southeast of Mogilew.

He received on December 03rd 1943 the knights cross for its crucial employment with the defense of a Russian break-through attempt in October 1943 west to Kritschew. 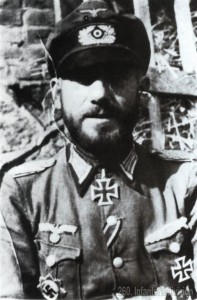 In May 1944, the 260th Infantry Division occupied a new main combat line southeast of Orscha. Here the Division was hit on June 22nd, 1944 by a large-scale Soviet attack with full force.

It was thrown back within few days over the Dnjepr River, encircled and smashed near Minsk by June 09th, 1944. Major Vincon survived the encirclement of Minsk, when he fought himself through the Russian lines as a leader of one approximately 260 men under inexpressible strains to the west.

By the end of October 1944 he took command of Infantry Regiment 466 of the newly founded 257th Peoples Infantry Division. He fought with this unit starting from January 1945 in the Unterelsass in the Lauterbach-section near Hagenau.

On January 8th, 1945 he received the close-combat badge in gold and on February 05th, 1945 as a major (reserve), for his achievements as commander 1st Company, Infantry Regiment 460, 260th Infantry Division the 728th Oak leaves to the knight cross .

By mid March 1945 the 257th Peoples Infantry Division had to join the retreat of the 1st Army. It crossed the Rhine River near Karlsruhe and was still engaged in defense fighting by beginning of April 1945. Since April 13th, 1945 Otto Vincon is missing in action after a reconnaissance patrol in the area Wildbad-Kaltenbronn in the northern Black Forest.