General of the Infantry Hans Schmidt 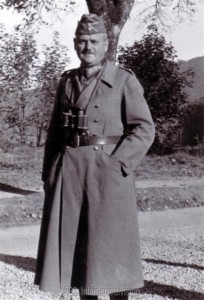 Hans Schmidt was born on 28 April 1877 in Ulm / Donau as the son of a Brigadier General (Medical Corps).

He entered military service on 11 july 1895. During Wold War I, he was posted as Major and Battalion Commander with the 121st Infantry Regiment “Alt-Württemberg” in Ludwigsburg. After the war, he was taken over into the Reichswehr, which he left on 31 January 1935 as Lieutenat General.

During the mobilization 1939, he was re-activated and became the first commander of the 260th Infantry Division. Under his command, the division reached the Desna River on 1 September 1941 being the first major German unit there. Even though the flank were threatened by Russian forces, he decided to send the Infantry Regment 470 across the river near Wibli and Poski and build a bridgehead on the southern bank near Kisselewka. On 2 September 1941, Wibli was taken and the river crossing was sucessfull. The connection with the southern army group was established. On 06 September, he received the Knight’s Cross for this action.

On September 24th, 1941 he released the following Orders:
“The Fuehrer and Supreme Commander of the Wehrmacht hat awarded me with the Knights Cross of the Iron Cross. This award is an appreciation of the achievements of the division that fought it’s way south in heavy combat, forced a first bridgehead over the Desna River and played a decisive role of the success in the fights against the Russian Army Group South. I am proud to lead this unit and I thank all soldiers”.