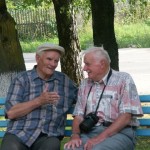 German and Russian veterans as friends

The veteran association of the former 260th Infantry Division was founded shortly after the II. World War ended. It’s primary aim was to support fellow soldiers and comrades, that needed help after returning from war or captivity as a prisoner of war. The first official meeting was held on 13th / 14th October 1956 in Ludwigsburg, the Divisions former garrison.

After the original mission was fulfilled and the “Iron Curtain” became more penetrable, they conducted a number of journeys to the former battlefields in Russia handing over donations to schools, orphanages and other people in need. Until today, 12 transports (4 railway cars and 8 trucks) were delivered.

But not only the survivors of the war need assistance: the cemeteries for thousands of fallen soldiers are taken care of by the German Volksbund (War Grave Commission) and the various veteran associations. 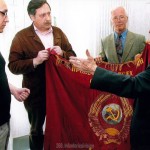 In Mai 2009, a belorussian TV Team did research on world war II battles in the Soviet Union. During a meeting with the veterans from 260th Infantry Division, they were handed Soviet Troop Colors that were captured by the veterans during a battle in 1941.

The association dissolved in August 2012 due to the fact that the majority of the men are above 90 years old and travelling became very diffcult.