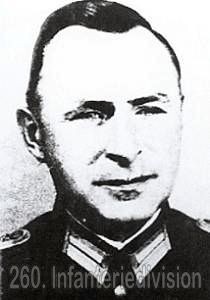 Guenther Klammt was born on May 9th 1898 in Loewenberg in Silesia. During World War I, he joined the Prussian army as cadet of the Grenadier Regiment Nr. 6  On May 01st he was promoted to second lieutenant and served as platoon leader, company commander and battalion adjutant. During the war, he was awarded the Iron Cross 2nd and 1st class and the black wounded badge.

At the end of the war, he left military service but re-joined the Reichswehr on November 29th. His unit was infantry regiment 6. He was promoted to first lieutenant at the machine gun company of his regiment.

Promoted to captain on October 1st 1932, he assumed command of a company in his regiment until October 1st 1934. He was the transferred to infantry regiment 47. He led one of the regiments companies from October 1st until March 1st 1938.

After being promoted to major on January 1st 1938, he became adjutant of the 34th infantry division stationed in Koblenz on March 1st 1938.  There, he experienced the beginning of World War II. He stayed there as Lieutenant Colonel until April 1st 1940.