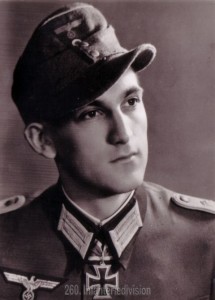 Felix Ostermann was born on December 22nd 1917 in Hötting near Innsbruck in Austria.

After 3 days of artillery barrage, opposing forces were able to break through on different places. 3 tanks and 180 soldiers attacked Captain Ostermann’s command post. With only 18 men, he defended his position. One thank had the commanders hatch open, he battled his way close to it, threw a grenade inside it and defeated the crew. 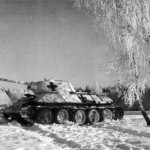 With a captured T-34, he started a counter attack. The tank was shot, Ostermann remained unharmed. Together with reinforcements, he was able to throw back enemy forces. Russian forces launched another attack and took the command post. Captain Ostermann rounded up all reserves and stabilized the situation.

For these actions, he was awarded the Knights Cross on August 26th 1943 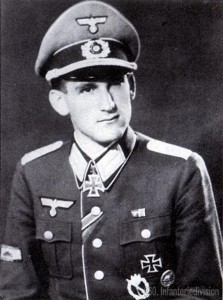 He was also awarded the following medals:

Captain Felix Ostermann died in October 1997 in Völs / Austria and was buried there.